Girls in the Dang region of Nepal are learning about sexual and reproductive health thanks to a project funded in part by the Rural Coordination Centre of BC’s (RCCbc) Rural Global Health Partnership Initiative (RGHPI).

The project—the University of British Columbia (UBC) Nepal Sexual and Reproductive Health Education (SRHE) project –aims to empower youth and improve the overall health of adolescents in the rural district of Dang, Nepal, which is home to the Indigenous Tharu people.

Medical students at UBC helped to create and provide educational materials to augment the existing sexual education curriculum in rural Nepal and increase access to information and health care services.

Led by Lisa Nakajima, the project team concentrated their efforts on providing education for girls and adolescents who are members of the Tharu community, who are indigenous to the Terai districts that line the southern border of Nepal. 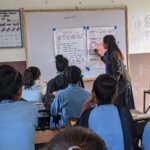 The Tharu people have long lived in forested areas of southern Nepal but when efforts to eradicate Malaria began to be successful, other groups came to the region and took the land. This led to extreme poverty for the Tharu community, who were forced to become labourers on land they no longer owned. This in turn led to the Kamlari system, where ex-bonded labourers would turn to trading their daughters into indentured servitude to landowners in exchange for a piece of land.

Although campaigns to make the Kamlari system illegal were successful, systemic issues resulting from the practice continue to be felt.

There have been improvements in the past decade, but girls and young women still face many challenges to accessing sexual and reproductive health education. The barriers they face include:

In rural areas, the story is even more marked.

Nakajima, who is interested in pursuing a career in rural Family Medicine, said: “Not only are these sexual and reproductive health services limited in rural and remote areas, but many have challenges accessing available services in the city due to financial constraints, geographic barriers, social stigma, lack of knowledge of available resources, as well as the possibility that their husbands might object.”

To make the educational program sustainable, the UBC team decided that being able to train a local educator was key.

“Not only are these sexual and reproductive health services limited in rural and remote areas, but many have challenges accessing available services in the city due to financial constraints, geographic barriers, social stigma, lack of knowledge of available resources, as well as the possibility that their husbands might object.

Luckily, the team was able to recruit Sita Khumal, who speaks Tharu, Nepalese and English. With the support of a $10,000 grant from RCCbc, they were not only able to pay for her time but also pay to print up culturally sensitive materials.

And the program has hit the ground running. While at first the girls were nervous about the sessions, the education has now become a source of pride. The girls are even making T-shirts that proudly display their participation in the project.

Khumal said she has seen a change in the girls as the sessions have gone on. She said: “In our groups the girls are very active now. Whatever they are curious about, they ask me very freely, and these are changes since first running the sessions. I think these sessions really helped them to know about many things so I am really excited to continue to run these sessions.”

UBC medical student Alana Chambers, who is part of the team leading the project, said: “It definitely has been well received.”

“A lot of the girls involved are overcoming the initial shyness that is perpetuated by the social and cultural norms that they’ve grown up around.

Another thing that helped make the project a success was making connections with mother’s groups in the community, who have a lot of social sway. They also collaborated with other organizations that had similar aims.

“We collaborated with a number of Nepalese organizations that already do education, including Creating Possibilities,” explained Nakajima. “They connected us to resources and then our partners took those resources and adapted them to the Tharu community and made sure they were relevant for the Tharu culture.”

That sensitivity to culture is something that the team plans to use when they practice medicine here in Canada.

We have lots of rural places here in BC and Canada in general that face those same barriers just in a different context. And I think that this problem-solving process and just trying to generate creative strategies to address those and create more equitable access to care, that’s going to translate anywhere in practice.

BC Rural Health Conference: A place to reconnect in May 2022

Rekindling ties can bring benefits to our lives. So why not take time to rekindle your rural health connections or—even better—make new ones at the 2022 BC Rural Health Conference (RHC 2022) this spring? Join the Rural Coordination Centre of BC (RCCbc) on May 13–15, 2022, for this unique and dynamic rural medicine conference.